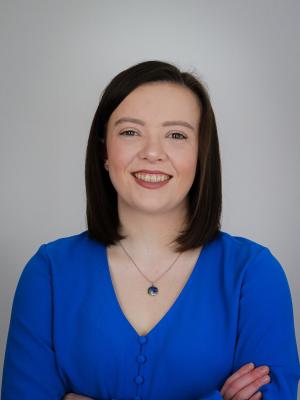 A Trainee Accountant with the Northern Ireland Audit Office has been shortlisted as a finalist for the Chartered Accountants Ireland’s (CAI) prestigious 2022 Chartered Star award.

Sinéad Henry, from Newry, is one of five finalists for the award, which recognises exceptional achievement among young professionals and accountancy students. The Chartered Start will represent Chartered Accountants at the One Young World Summit later this year - this major event brings together young leaders from across the globe to discuss and explore solutions to an array of topics, including conflict prevention, ethical leadership, safeguarding our oceans, as well as gender and health equality.

Sinéad’s achievement is in recognition, not only of her professional achievements as a trainee accountant, but also of her work in support of the United Nation’s sustainable development goals. In particular, Sinéad has been recognised for her work to promote gender equality and mental health.

Sinéad has worked with the Police Service for Northern Ireland to develop the No Grey Zone Campaign, which is aimed at calling out sexual assault in all its forms. Sinéad also developed consent workshops for a local university and is currently involved in a new scheme training hospitality staff in handing sexual harassment complaints.

In a previous role Sinéad developed a programme for University Students to provide training on working with a young person with a mental health issue.  She worked with a suicide awareness charity to develop this training and delivered 4 workshops for 100 students in leadership positions.  This was crucial in helping to ensure a safe space for students to talk about their mental health and wellbeing, while also ensuring student leaders were able to provide the necessary support and signposting.

Since joining the Audit Office Sinéad has continued to pursue her passions alongside her study and work. Sinéad has played an active role in the Wellbeing Committee for my organisation, particularly during lockdowns. She is also a Health Champion and is currently working with a team of NIAO colleagues to develop a calendar of staff wellbeing events for the next 3 years.

This latest accomplishment for Sinéad follows on from her outstanding professional successes. In November, she received the Samuel Smyth Memorial from CAI after placing 2nd second in the island of Ireland in her CAP2 exams (Chartered Accountants Proficiency 2) last year.

“It’s such an honour to have made such an impressive shortlist, especially when one considers the calibre of other applicants. I would be delighted to have the chance to go to One Young World and represent the profession of accountants.”

“I have always been determined to make a positive impact through my profession and outside of work - promoting gender equality and mental health and wellbeing are particular passions of mine. To be recognised for this work is truly humbling and I am very grateful to Chartered Accountant’s Ireland and Chartered Accountants Worldwide for giving me the chance to talk about these issues more publicly, as well as for giving me the an compete for this opportunity”.

Check out a video interview with Sinead on the Chartered Accountants Ireland YouTube page.