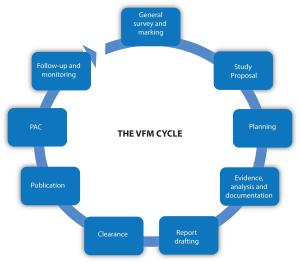 Audit teams set up a plan for the study in terms of time, cost and quality

The Draft report is ‘cleared’ (facts confirmed) with the audited body

The report is published and laid in the Northern Ireland Assembly

Most reports will form the basis of a hearing of the Assembly Public Accounts Committee, which publishes its own Report